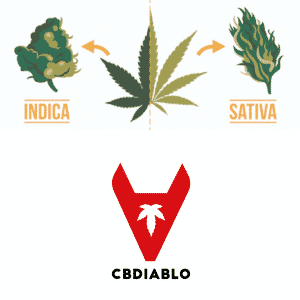 Although there is plenty of research into terpinolene ongoing: the terpene has been found to contribute to a plethora of well-being outcomes.

These differences, however, are generalisations and do not truly represent the qualities of either strain; by a long way, the most important factor in this is the Cannabinoid & Terpene profile of the plant. So it is much more important to understand the chemical structure of the plant (eg- CBD ratio to THC etc..) rather than the strain. For instance, a strain that is a Sativa with a high CBD content will feel much more like an Indica for example- there is no real telling the difference.

For those of you who don’t know, that there are three main strains: Sativa, Indica, & a Hybrid of the two (we will talk about Sensimilla towards the end – no Seeds). These types (or strains) of Cannabis strains are deeply routed in Cannabis culture and usually, if you are into smoking you will be asking which is your preference.

If you are looking for an Indica strain CBD product, you can find it here!

Well, if you ask somebody who knows their Cannabis well:

The physical differences between the strain are:

While the battle between Sativa & Indica is fairly obvious in the cannabis community, it is much less obvious when you are looking into CBD oils or CBD paste. All CBD oils in the UK (including ours) are produced (or should be according to the FSA & CTA) using a Hemp extract (from leaves and/ or flower), from a strain called Sativa L. – which is a part of the Cannabis family but isn’t known for being smoked down to the fact that there is a very high level of CBD, and low levels of THC (why people smoke Cannabis in the first place).

What is the difference between Indica vs Sativa?

This is important for those who know a lot about Cannabis and are looking for a CBD oil. It would make sense that you would look for an Indica based oil as most people who buy a CBD oil are not looking for it to get them ‘hyped’. So when faced with an overwhelming array of oils that are made with a Sativa, it may be confusing. Some companies make a big deal of which strain they use but at the end of the day, does it really make too much of a difference.

The production of most CBD oils seems to make the strain somewhat irrelevant. Hemp is used in the production of CBD oils due to its high concentration of CBD, and generally, most of the other important chemicals are stripped out or reduced significantly- for legal reasons: According to the Misuse of Drugs Regulations (MoDR) 2001 regulation 2, the legal level of THC is 1mg per closed container, irrespective of size. 0.2% THC is the maximum content which is for growers and refers to raw extract. Amnesia Haze is good for

Harlequin is good for

Indicas are much shorter than Sativas but still taller than Ruderalis strains. They reach up to three to five feet in height with thicker stems and “broader” leaves.

The three you may have heard of are Sativa, Indica, and Hybrid. The other is Ruderalis, which is often lesser-known among casual or beginner cannabis users.

THC binds to CB1 receptors located all throughout your brain. This not only causes a euphoric “high” but may also alleviate symptoms of pain, pain perception, muscle spasticity, nausea, vomiting, and glaucoma.

Hybrid strains are a mix of Indicas and Sativas via selective crossbreeding and hybridization. Some breeders also mix Ruderalis strain genetics in there to quicken the growth pattern and boost CBD levels.

As a recreational or medical cannabis user, it’s important for you to know exactly which strains to purchase. There are thousands of different ones out there, each with varying effects and benefits depending on what you’re using them for.

Indica is a colder-weather species with short, dense plants and dark, broad leaves. It takes six to eight weeks to mature — a shorter time than sativa — and typically has a greater yield. Indica is generally known for its relaxing high — think hanging-out-on-the-couch vibes — and medically, it can help those with nausea, anxiety and acute pain.

Sativa versus indica versus hybrid

CBD, or cannabidiol, is a non-psychoactive cannabinoid that accounts for the second-highest volume in cannabis (after THC). It doesn’t make us feel high and instead works to alleviate things such as anxiety, inflammation, and pain perception.

Note: When deciding between sativa, indica or a hybrid, it’s worth talking to an expert about the kind of high you’re looking for; things like dosage, tolerance, consumption method, and the specific plant’s chemical profile can have more of an effect on your experience.