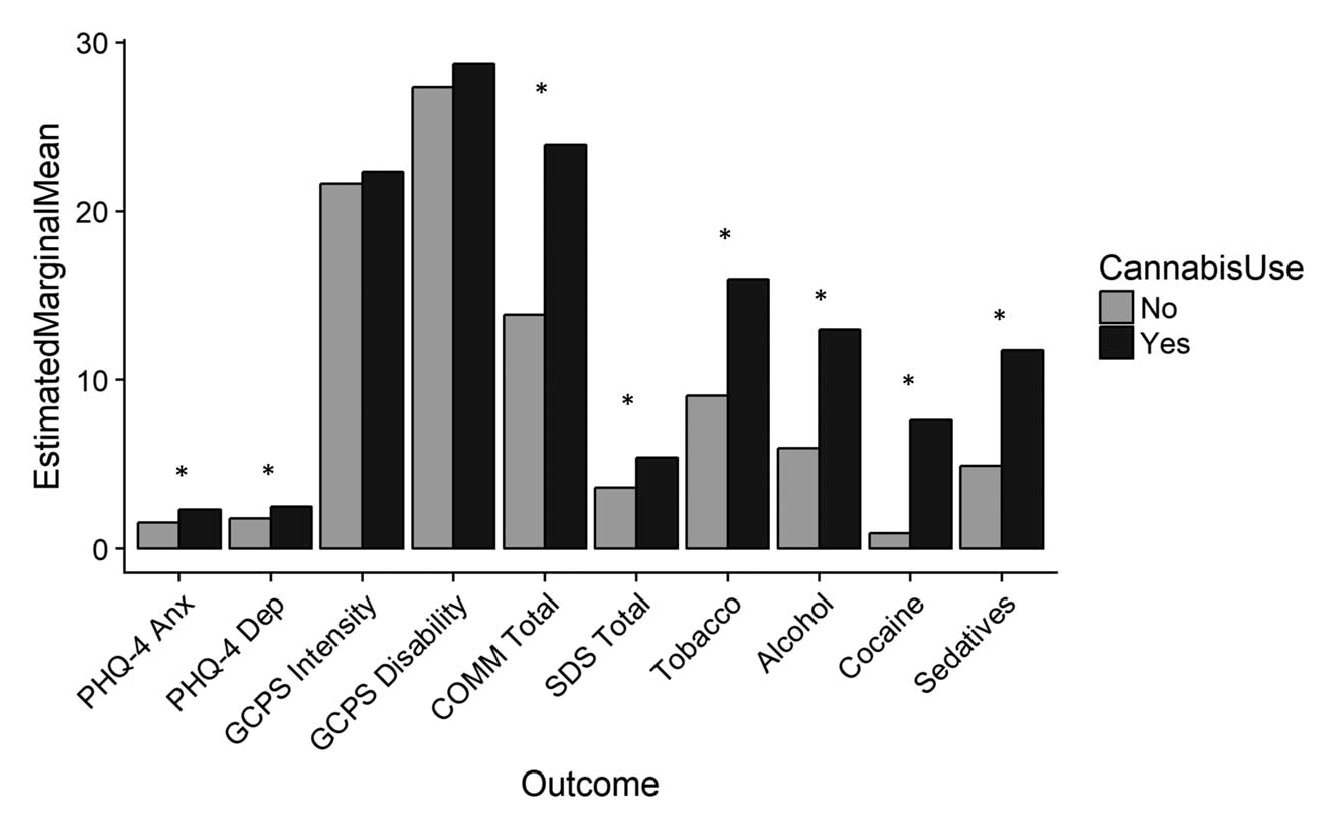 Those combining opioids with cannabis were also more likely to be taking opioids not as prescribed and have symptoms of opioid dependence, in addition to endorsing using other substances. It is possible these individuals may represent a subset of people with chronic pain and greater overall substance use-related problems.

Participants were adults ages of 18 to 64 (74.67% female, average 38.59 years old , standard deviation of 11.09) reporting current opioid use for pain and current chronic pain that persisted for at least 3 months. The sample was predominately White (77.8%), with another 8.7% identifying as Black/African American, 13.1% Hispanic/Latino, 3.3% Native American/Alaska Native, 0.9% Asian/Pacific Islander 2.7% multiracial, and 1.1% other. In terms of education, a little over a fifth (5.8%) did not complete high school, whereas over a quarter of the sample (31.3%) reported attaining a high school diploma, with 22.4% reporting ‘‘some college,’’ and 40.4% having attained an associate ’s degree or higher.

This cross-sectional study surveyed 450 United States adults who endorsed taking opioids to manage chronic pain. Of these 450 people, 176 endorsed also using cannabis for pain management. Participants were asked about their opioid and cann a bis use, as well as any use of other substances , including nicotine. Participants were also assessed for opioid use problems , a s well as anxiety and depression. Questionnaires administered included 1) the Alcohol, Smoking and Substance Involvement Screening Test (ASSIST) , an 8-item questionnaire designed to asses risk of substance use involvement , 2) the p atient Health Questionnaire-4 (PHQ-4) , a 4-item self-report measure comprised of the PHQ-2 for depression and the GAD-2 for anxiety , 3) t he Current Opioid Misuse Measure (COMM) that is used to identify individuals who are exhibiting behaviors of problematic opioid use , 4) the Severity of Dependence Scale (SDS) , a measure severity of dependence to opioids , and 5) t he Graded Chronic Pain Scale (GCPS) , a measure that assesses pain intensity and pain disability . The authors statistically controlled for differences among study participants in age, sex, income, and education.

Figure 1. Graph showing differences between study participants using opioids alone (grey bars), and opioids in conjunction with cannabis (black bars) to manage chronic pain. Measures are reported as estimated marginal means (vertical axis); in other words, the mean response for each measure, adjusted for the other reported measures. The asterisk (*) indicates a highly significant difference at the p< 0.005 level, meaning the differences observed are highly unlikely to be due to chance. It is important to note that the range of possible scores on each measure is different. Participants combining opioids and cannabis reported more anxiety and depression, were more likely to be using opioids not as prescribed and endorse more symptoms associated with opioid dependence, and were more likely to be using tobacco, alcohol, cocaine, and sedatives. PHQ-4 Anx= Anxiety, PHQ-4 Dep= Depression, GCPS Intensity= Pain intensity, GCPS Disability= Pain disability, COMM Total= Current not as prescribed opioid use, SDS Total= Severity of opioid dependence (Source: Rogers et al., 2018).

Also, these individuals were possibly purchasing cannabis from the illicit market in which strains with higher THC contents predominate (the compound in cannabis that causes euphoria/high). This study cannot tease apart whether CBD (a compound in cannabis thought to have some therapeutic benefits but does not cause euphoria/high) in combination with opioids for chronic pain would be associated with different mental health and substance use outcomes.

Many people argue that cannabis is a safe and effective drug for chronic pain management , and have gone as far to say that cannabis can reduce the need for opioid pain medications and the risks that go with this class of drug . At the same time, the co-use of certain substances is generally associated with poorer outcomes than single substance use . In t his article , Rogers and colleagues assesse d whether individuals who were combin ing cannabis with opioid s to manage chronic pain had less self-reported pain than those using opioids alone, and whether individuals combining cannabis and opioids h ad more mood – related problems. The authors also explore d whether these individuals are more or less likely to have problems with opioids and engage in the use of other substances.

HOW WAS THIS STUDY CONDUCTED?

Many promote cannabis as a safe and effective drug for chronic pain management, and have gone as far to argue that cannabis can reduce the need for opioid pain medications. At the same time, it is well appreciated that the co–use of certain substances is generally associated with poorer outcomes than single substance use. In this study, authors found that individuals with chronic pain who combine opioids and cannabis are not functioning as well as those who are only using opioids. Although the exact nature of this relationship is unclear, the results may have implications for medical cannabis in the context of chronic pain management.